Erin Cheatham (BA 2013) graduated with a Bachelor's in English literature, with areas of concentration in Studies in the Novel and Digital Humanities. After developing a passion for studying the intersection of technology and traditional humanities scholarship, Erin attended the University of Nebraska-Lincoln where she received her MA in Literature and a certificate in Digital Humanities. While at UNL, she worked on several large digital projects, encoding 19th-century travel diaries and manuscripts for the NEH-funded Livingstone Online archive, contributing to the creation of a digital poetry educational resource for high schoolers across Nebraska, and creating a digital storytelling platform for the voices of migrant and refugee populations in the local community. Deciding to pursue a career outside of academia, Erin now works as a digital marketing manager for a large technology company in Atlanta, leading a team of web developers and executing digital strategies for websites and online programs. More information about her work can be found on her website.

Since fall 2016, Nicole Lobdell (UGA English PhD 2013) has been an Assistant Professor of English (NTT) at DePauw University in Greencastle, Indiana. In September 2018, Dr. Lobdell and Dr. Nancee Reeves (UGA Department of English) published a critical edition of H.G. Wells’s The Invisible Man with Broadview Press. In December 2018, Dr. Lobdell’s article on “Coining Counterfeit Culture: Christina Rossetti’s Goblin Market" was published in Victorian Networks. In March 2019, she received an NEH 2019 Summer Institute Fellowship to attend a month-long workshop at the East-West Center for Asian Studies at the University of Hawai‘i at Mānoa. 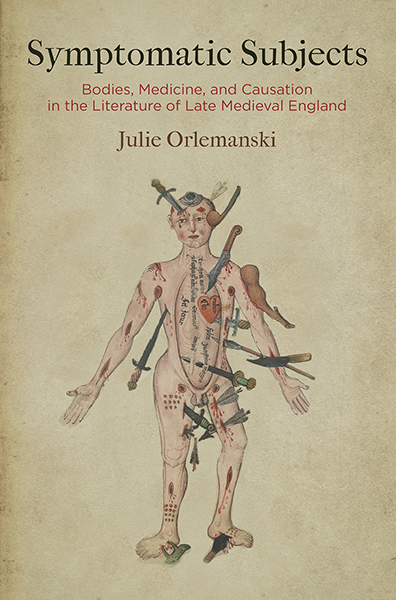 Julie Orlemanski (UGA English BA 2004; Harvard University PhD 2010) is an assistant professor of English at the University of Chicago, where she teaches medieval literature and literary theory. Her monograph, Symptomatic Subjects: Bodies, Medicine, and Causation in the Literature of Late Medieval England appeared in 2019 from the University of Pennsylvania Press. Symptomatic Subjects takes as its starting point the explosion in the English discourse of medicine in the late fourteenth and fifteenth centuries, and, over eight chapters, shows how preachers, mystics, book owners, and poets like Geoffrey Chaucer, Robert Henryson, and Thomas Hoccleve drew on the language of phisik to chart new circuits of legibility between physiology and personhood. Julie is now at work on two new book projects. One will build on her recent NLH article, "Who Has Fiction? Modernity, Fictionality, and the Middle Ages." The second, tentatively titled "Things Without Faces: Prosopopoeia in the Middle Ages," seeks to offer a new history of literary person-making in the Middle Ages, one that begins with twelfth-century innovations in devotional imagery and speculative allegory and continues to the reinvention of those figural techniques in the French and English poetry of the two centuries following. Julie is book-reviews editor at the journal postmedieval and is currently chair of the MLA Forum Executive Committee on Middle English.

Leslie Petty (UGA English PhD 2003) is now Associate Professor and Chair of the English Department at Rhodes College in Memphis, TN. Currently serving as the Director of the 2020 American Literature Association Conference to be held in San Diego, CA., Dr. Petty has three publications either in press or forthcoming: “‘Women who know the joys and sorrows of a pay envelope’: Feminism and Work in Edna Ferber’s ‘Sisters Under Their Skin” in Studies in the American Short Story (Forthcoming 2020), “Realism and the New Woman” in The Oxford Handbook of American Literary Realism (2019), and “‘Grim old London welcomed me back’: Elizabeth Cady Stanton’s Second Foray into Europe” in Transnationalism and Modern American Women Writers (2019).

Miranda Yaggi Rodak (UGA English MA 2005; Indiana University PhD 2015) as recently hired by Indiana University’s Department of English as the Director of Undergraduate Teaching, an administrative position that carries a 1/1 teaching load and primarily oversees curriculum alignment in the undergraduate program as well as supervises and develops our department's TAs and lecturers. She also teaches seminars in the IU Liberal Arts and Management Program (LAMP). In 2018 she received an Innovate Award​, sponsored by the IU Faculty Academy on Excellence in Teaching, and this past year, she received both an Indiana University Trustees Teaching Award and an Active-Learning Grant for curriculum design, sponsored by Indiana University's Center for Innovative Teaching and Learning and The Office of the Vice Provost for Undergraduate Education

Amber Shaw (PhD 2012) earned tenure at Coe College in May 2019 and was promoted to Associate Professor. She has also been the Henry and Margaret Haegg Chair of English effective July 1st, 2019

Fiona Sheehan (UGA English BA 2013) has published an article inspired by her undergraduate honors thesis on Elizabeth Bishop's letters to her grandmother Rhoda Wheeler Sheehan. Fiona learned about these letters while she was in Dr. Susan Rosenbaum’s undergraduate American poetry class. Dr. Rosenbaum enthusiastically recalls that Fiona “literally walked into the class with some of these letters in a plastic bag!” While doing a directed reading with Dr. Rosenbaum Fiona found another trove of letters. Fiona’s thesis on the letters and a possible Elizabeth Bishop poem found within the correspondence was chaired by Dr. Rosenbaum with Dr. Aidan Wasley acting as her second reader. Thomas Travisano, Bishop's biographer came down to Athens to read the letters for his biography. After Fiona graduated and did two years in the Peace Corps, she turned her attention back to this research. With the help of Dr. Travisano, Dr. Susan Rosenbaum, Dr. Wasley, Megan Marshall (another Bishop biographer), other Bishop scholars, and her family, Fiona turned the first part of her thesis on the early letters between her grandmother and Bishop into an article for Resources for American Literary Study. Fiona is hoping to follow up “Affectionately Yours, Bishop”: The Early Correspondence of Elizabeth Bishop and Rhoda Wheeler Sheehan” (RALS 40, 2018, pp. 239-280) with another article about the later batch of letters, from the 1960s and 70s when Bishop and her grandmother resumed their friendship once Bishop moved back to the U.S. from Brazil.