Future Plans: In the fall, I will begin my first year as an English literature teacher at Winder-Barrow High School. I will also be pursuing my M.Ed. at UGA.

Future Plans: I will be attending law school after a gap year.

“And what were thou, and earth, and stars, and sea, If to the human mind's imaginings Silence and solitude were vacancy?,” from “Mont Blanc” by Percy Bysshe Shelley. 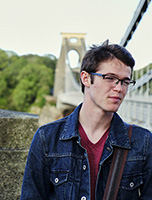 Future Plans: After taking the next year off, I intend to pursue a PhD in English focusing on media and transmission analysis of literature (with a possible emphasis on early English or medieval lit). Eventually I'd primarily like to teach composition classes that focus on multi-modality and multi-media.

Future Plans: I will be attending the University of Georgia School of Law in the fall of 2020.

“Ring the bells that still can ring Forget your perfect offering There is a crack in everything That's how the light gets in,” from “Anthem,” by Leonard Cohen. 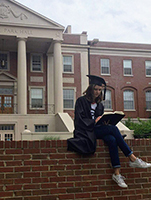 "Yes, Jo was a very happy woman there, in spite of hard work, much anxiety, and a perpetual racket," from Little Women by Louisa May Alcott.

“I remembered that the real world was wide, and that a varied field of hopes and fears, of sensations and excitements, awaited those who had courage to go forth into its expanse, to seek real knowledge of life amidst its perils," from Jane Eyre by Charlotte Brontë.

Future Plans: I am planning to pursue an MFA in creative writing (fiction) in 2021, with possible other graduate work after.

Memory of Park Hall: “In nearly all of my semesters at UGA, I had a class on the second floor of Park Hall. Each time, whether or not it was convenient to my route, I would take the flight of stairs that at the top had a picture of Zora Neale Hurston. It became a funny little private ritual.”

“Who in this mad arrangement wouldn't be recalibrated by proximity?” —Leontia Flynn.

Future Plans: I will be attending the University of Georgia School of Law.

"Beware; for I am fearless, and therefore powerful,” from Frankenstein by Mary Shelley.

“Literature is the immortality of speech.” —August Wilhelm von Schlegel.

Future Plans: My future plans include pursuing my dream of becoming a published author.

“Instead, there were little daily miracles, illuminations, matches struck unexpectedly in the dark; here was one,” from To The Lighthouse by Virginia Woolf.