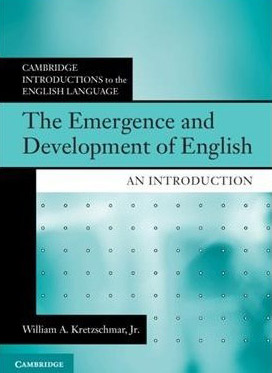 Bill Kretzschmar has spent Fall 2018 as faculty member in residence for the UGA@Oxford program. Before going to Oxford in September, he taught a course at the University of Oulu in Finland. Also in September, which is November in the US, his third book in the last year and a half appeared, this one from Cambridge University Press. The Emergence and Development of English: An Introduction is the latest entry in the Cambridge Introductions to the English Language series, which features short, readable textbooks on important topics in the field. This book, like many of Kretzschmar's, uses complexity science to explain human speech, this time for the history of the English language.

Several faculty members have recently been awarded grants and fellowships. Three faculty members have received support for individual projects from the Andrew W. Mellow Foundation and the Willson Center for Humanities and Arts: Casie LeGette, "Editing Empire: British Anthologies and School Readers in the Caribbean," Ed Pavlić “The National and Global Musical Routes of the Deep South,” and Barbara McCaskill, "Black Southern Activism Past and Present — A Transatlantic Legacy.” A Willson-Mellon grant also supports a team of scholars, including Sujata Iyengar, Miriam Jacobson, and Jason Payton, working on “The Southern Strategies of Early Modern Empires.” 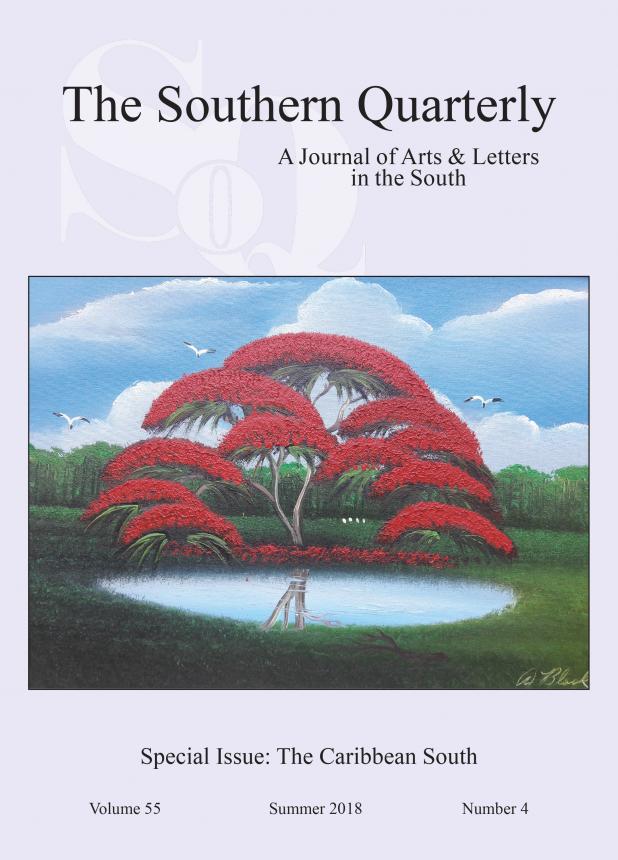 John Wharton Lowe recently presented talks at two conferences: “'Double the Yoke?  Double the Joke!': The Comedy of Dual-Ethnicity in Gish Jen's Mona in the Promised Land” was presented in June at the American Humor Society Conference, which convened in Chicago; “From China to Cuba, and Back: The Conundrums of Ethnic Identity and Kinship in Cristina García’s Monkey Hunting” was read in June at the bi-annual meeting of the Society for the Study of the Multi-ethnic Literatures of Europe and the Americas ( MESEA) in Graz, Austria. Lowe has also served as the guest editor of a special edition of Southern Quarterly Volume 55, 4 (2018), on “The Caribbean South,” which features essays by Lowe; Eric Johnson; Alvis Dunn; Margaret McGehee and Emily Taylor; Stephen Park; Jeff Karem; J. Michael Dash; Solimar Otero; Keith Cartwright and Dolores Flores-Silva; Justin Mellette; and the late Antonio Benítez-Rojo. Lowe’s contributions were “Introduction: The Caribbean South,” and  “Pirates of the Caribbean in Frank Yerby’s The Golden Hawk.”

Dr. Barbara McCaskill has accepted invitations to serve on the Editorial Board of the International Journal of Transatlantic Studies and the Advisory Board of the Society for the Study of American Women Writers. She continues her research on the fugitive slaves William and Ellen Craft, and presented a talk about old questions and new discoveries to members of the Osher Lifelong Learning Institute in September. Dr. McCaskill presented a paper with PhD student Sidonia Serafini on the serial autobiographies of anti-lynching activist Reverend Peter Thomas Stanford (c. 1860-1909) at the October 2018 conference on “Frederick Douglass across Times, Places, and Disciplines” in Paris, France. McCaskill and Serafini also presented an essay about Reverend Stanford’s nineteenth-century print productions from their completed book at the 17th annual conference of the International Transatlantic Studies Association held in Dahlonega, Georgia, in July. 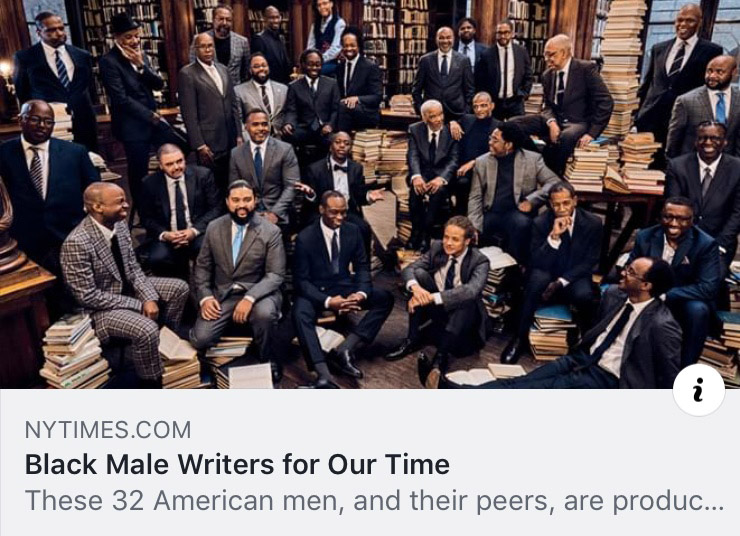 Hamilton Holmes Professor of English Reg McKnight was one of thirty-two writers featured in an interactive New York Times photo essay that appeared in T Magazine. The essay celebrates “Black Male Writers for Our Time,” who are “producing literature that is essential to how we understand our country and its place in the world right now.” 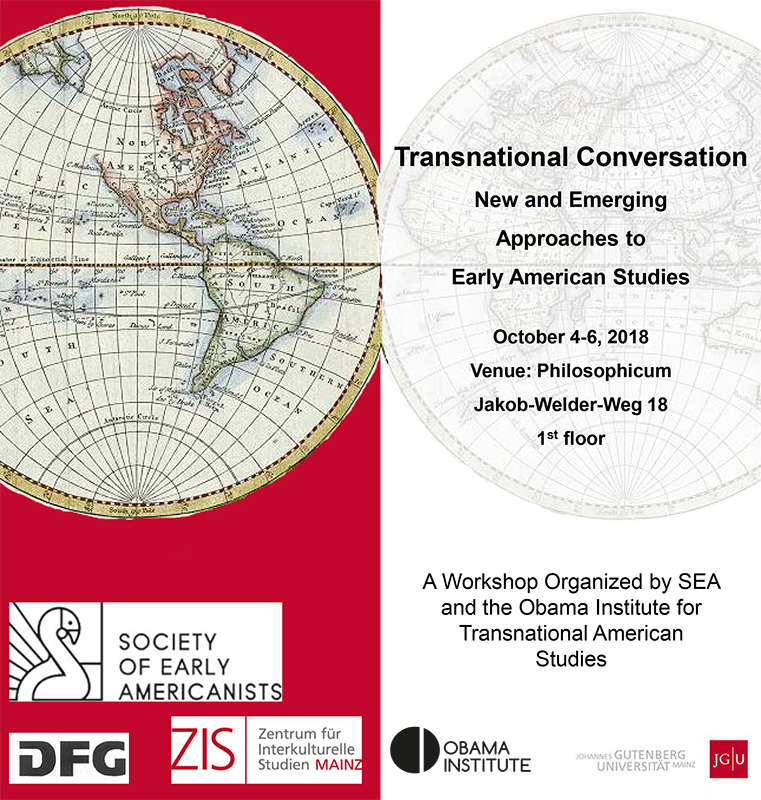 Jason M. Payton delivered work from his current book project at the "Transatlantic Conversations: New and Emerging Approaches to Early American Studies" workshop in Mainz, Germany. The workshop ran from Oct. 4-6, 2018 and was co-sponsored by the Society of Early Americanists and the Obama Institute for American Studies at Johannes Gutenberg University. The workshop convened scholars from the U.S. and Europe to establish transatlantic scholarly networks, facilitate collaborative projects, and explore differences in archives and methods between U.S. and European-based early Americanists. Dr. Payton’s paper was entitled “Dampier’s ‘Golden Dreams,’ Nomadism, and the Spaces of Empire.”

Susan Rosenbaum attended the Elizabeth Bishop in Paris conference (June 6-8, 2018) where she gave a paper titled "Elizabeth Bishop and Gertrude Stein in Paris: Varieties of Experiment." She and her current students are continuing their work on the NEH funded project, Mina Loy: Navigating the Avant-Garde.

Dr. Fredric T. Dolezal (Retired) and Ward J. Risvold (English PhD 2018, Lecturer, UCSD) published “Did Anne Maxwell Print John Wilkins’s An Essay Towards A Real Character and a Philosophical Language (1668)?” in Historical Dictionaries in their Paratextual Context (Lexicographica. Series Maior 153. De Gruyter, 2018, Roderick McConchie and Jukka Tyrkkö, editors). In this essay, in order to answer the question posed in the title, Dolezal and Risvold explore the careers of a group of authors, booksellers, and printers in 17th-century England; they present evidence proposing that Anne Maxwell, best known for printing Margaret Cavendish’s scientific treatises, was the printer of John Wilkins’s magnum opus. Bishop Wilkins, a co-founder of the Royal Society, constructed a universal language, both written and spoken, along with a ground-breaking English dictionary. This 454-page folio-sized volume, an imposing artifact of print technology, is a major contribution in the history of linguistic ideas.

Professor Sujata Iyengar and UGA PhD students in Early Modern Literature began Year 3 of Iyengar’s multi-year $53,000 Partner University Fund collaboration with Université Paul Valéry Montpellier III (UPVM3), “Scene-Stealing/Ravir la scène,” with sorrow that Christy Desmet would no longer accompany them on their regular visits to France. Nonetheless the project went ahead with an international conference, “Scenes in the Other’s Language/Scènes dans la langue de l’Autre” from November 1-3, 2018; a roundtable on Gloria Naylor’s well-loved novel Mama Day and its relationship to Shakespeare (for which Iyengar received, with Athens-Clarke County Librarians, a $2000 Georgia Humanities Grant) and the creation (with UPVM3) of an online, multimedia resource on Shakespeare’s Henry V (for which Iyengar won a $13,000 Learning Technologies Grant to train undergraduate students in digital publishing and a fellowship for MA student Hayden Benson to help PhD student and research assistant Mikaela LaFave to author teaching materials and an essay about Shakespeare’s sources for the play).

Barbara McCaskill, Sidonia Serafini (PhD English), and Kelly P. Dugan (PhD Language and Literacy Education) have received funding for Black Southern Activism: A Transatlantic Legacy from the Andrew W. Mellon Foundation through the Global Georgia Program of the Willson Center for the Humanities and Arts. They will organize symposia in Birmingham, England (June 2020) and Athens, GA (November 2020) for scholars and students conducting research on transatlantic black activism, and community leaders involved in social justice issues. As a pedagogical component, Professor McCaskill’s English 8770 graduate seminar will create a digital storymap about the black abolitionist Ellen Garrison Jackson (1823-c. 1890). The site will spotlight Jackson's instruction of freed people and work in the Freedmen’s Bureau, and her anti-segregation activism. It will serve the Robbins House African American Museum in Concord, Massachusetts, and also involves undergraduates led by Professor Katie Simon of Georgia College and Professor Sandra Petrulionis of Penn State Altoona.

In March, the English Graduate Program hosted “Beyond the Tenure Track: A Symposium on Non-Teaching Careers for Graduate Students in the Humanities,” with the support of the Graduate Program Enhancement Grant. Cynthia Camp (Graduate Coordinator) and Casie LeGette (Job Placement Officer), with logistical support offered by Laurie Norris (BA 2008; English Administrative Specialist), brought in four speakers. Victoria Reynolds Farmer (BA 2006; MA 2008), James Gregory (PhD 2012), Emily Kane (PhD 2011), and Stephanie Hyre (MA 2008) are all alumni of our graduate program. They are now employed in various non-teaching careers: Public Radio International, learning technology, international education programming, and nonprofit social services, respectively. In a series of panels, the speakers discussed their own career trajectories, gave advice on resume building, and offered suggestions for ways graduate students could prepare for careers outside academia. The panels provided concrete advice and resources for graduate students curious about transitioning into non-teaching careers; students had opportunities to ask questions of the speakers, chat with them one on one, and build connections. The panelists all generously agreed to serve as resources for our students into the future.