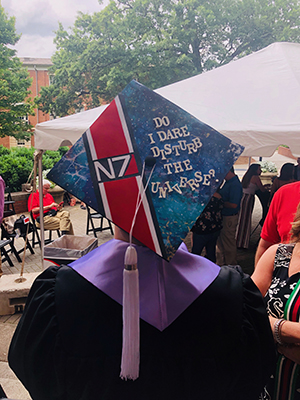 Honors Day recognizes the excellent work of our undergraduate and graduate students within the department, as well as the superb teaching by our faculty and teaching assistants. Our annual event also serves as the departmental graduation ceremony, where we recognize our majors in the more intimate setting of the Fine Arts Theatre. This year our speakers included a graduating senior, Rachael Dier, President of the Undergraduate English Association.

The Keynote Address was delivered by Mariah Parker, aka Hip Hop artist LINQUA FRANQA. LINQUA FRANQA is the hip hop project of Athens, Georgia-based linguist-turned-legislator Mariah Parker, whose passion for social justice and scientific fixation with hip hop language are obvious in the intricate, self-aware rhymes she interweaves with boom bap beats. Parker holds a Master's degree in Linguistics from the University of Georgia, where she now pursues a PhD in Language and Literacy Education. Her lyrics, garnished with haunting neo-soul hooks, tell unflinching tales of chemically-induced heartbreak, racial violence, reproductive justice, and feminist swagger. In the wake of a critically acclaimed first album and narrowly-clinched election to the Athens city council earlier this year, Parker has garnered the attention of CNN, The New York Times, Teen Vogue, National Public Radio, Al Jazeera, The Nation, Afropunk, The Root, The Bitter Southerner, Performer Magazine and others for her outspoken commitments to racial and economic justice and her electrifying live performances, which call listeners to self-reflection and critical action in their lives and their communities.

Teresa Tran, “The Incorporation of the Black Panther Party in The Hate U Give,” nominated by Barbara McCaskill

Honorable Mention: Luke Vines, “A Pathology of Currency and Commerce in Swann’s Way and Within a Budding Grove,” nominated by Andrew Zawacki

Judged by Johnny Damm (UGA PhD 2017), author of The Science of Things Familiar (The Operating System, 2017) and three chapbooks, including Your Favorite Song (Essay Press, 2016). His work has appeared in Poetry, The Poetry Review, Denver Quarterly, the Rumpus, and elsewhere. He lives in Santa Cruz, CA, serves as editor-in-chief of A Bad Penny Review and Opo Books & Objects, and teaches English and Creative Writing at San José State University.

Ginger Ko, “A Species with Milk for its Young to Remove”

"Constant Surveillance: Criticism of a 'Disciplinary Society' and the Paradox of Agency in Kamila Shamsie's Home Fire and Mohsin Hamid's Exit West"

"'That Bold American:’ The Construction of Race in the Letters of Christopher Wren Bunker”

"Through a glass, darkly: Collective Memory in the Works of Cristina Garcia and Ana Menendez"

"The Walrus Through the Looking-Glass: Modern, Dynamic Boundaries in Nineteenth-Century Women's Writing"

“Why Always Cleopatra: Gender, Affect, and National Identity in Nineteenth-Century Spaces of Art”

"With Love from All of Us: Stories"