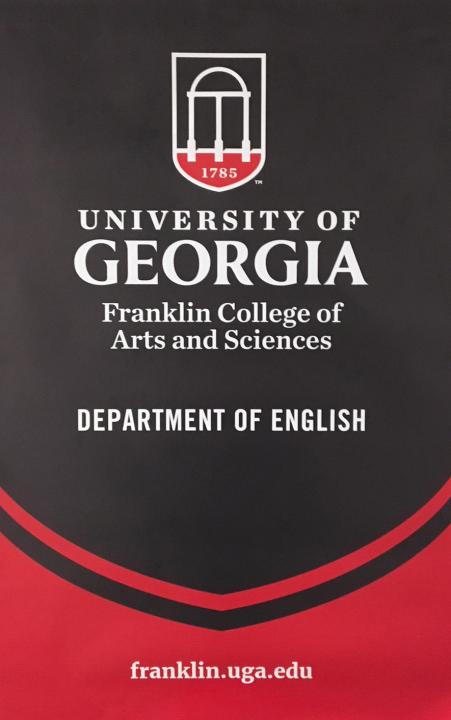 Dear colleagues, students, alumni, and all friends of the Department of English,

Welcome to 2018!  The new year brings much cause for celebration, as our faculty and students have good news to share about their accomplishments—local, national, and international.

By way of introduction, I am the new departmental head, and my research area of interest is rhetorical theory. I realize that “rhetoric” is an easily dismissed word and may seem, initially, foreign to the study of literature and language.  I would like to make the case, here, that on the contrary, rhetoric is essential to the work that we, all of us, do when we study literature or language.

I’ll spare you the long history of the term, but instead focus on the basic understanding that motivates my work.  Rhetoric was conceived of as the art of making persuasive arguments in order to decide “what to do” in the face of uncertainty. That is, according to Aristotle, how does a community decide how to dispense justice when one can never really know “what happened?”  A judge, to further the example, accepts testimonies of witnesses and arguments of what might be probable in order to render a judgment when certain knowledge is unavailable.  As another example that Aristotle would proffer:  should we go to war?  The future is an uncertain horizon.  How can one know if going to war is the most just thing to do?  All we have are arguments for or against, and decisions are made based on what is predicted to be the best possible outcome.

In short, despite common understanding that has resulted from Plato’s criticisms thousands of years ago, rhetoric doesn't just consist of “hot air” or “empty words”—it is primordially the way that we, as humans, are in the world, how we work together to create community, justice, and opportunity in a world of contingency and uncertainty.  Being in the world, being with others, requires that we use our words, our language. Admittedly, language is unstable and uncertain, but that is precisely why we need rhetoric:  to grapple, collectively, with such instability and uncertainty, to make the best cases for our behaviors, actions, institutions, laws, and judgments, in order to be in the world with each other.  Otherwise there is simply violence.

I believe that words matter, that words have material consequences, and that the study of language and literature is an important, foundational force to resist and to protect the world from violence.  The work that faculty and students do in the English department is to explore the words that create worlds—the variety of pasts, presents, and futures of the human experience, where we strive to be in the world, with the world, with each other, empathetically.

As one small example, to begin:  On a recent podcast of Code Switch, “Disrespect to Miss-Respect,” the narrators explored the 1963 infamous case of Freedom Rider Mary Hamilton, who bristled at the disrespect shown by the judge when he called her “Mary” rather than “Miss Hamilton.”  Hamilton thus demanded that the judge afford her the same respect that he had afforded white women, whom he addressed with the honorific title, “Miss.”  One might respond:  "But it’s just a word."  However, as Professor Barbara McCaskill remarks on this podcast—it isn’t “just” a word.  It is, on the contrary, a “very great force” of reproducing inequity, a significant signifier of racial oppression.

Multiple examples of the power of words is evidenced by the research and creative works of our faculty.  Browsing through the display cabinet recently in the foyer of Park Hall, I noted that our faculty have attuned their research to the ways language creates and recreates worlds.  John Lowe’s Calypso Magnolia (University of North Carolina Press, 2016) demonstrates how “nation” and “national identity” is rhetorically constructed—that is how words and voices set boundaries beyond whatever “physical” boundaries may exist (and, indeed, how those very physical boundaries are rhetorically constructed—how the “South,” for example, is a “portable” concept). Sujata Iyengar’s Shakespeare’s Medical Language (Bloomsbury, 2011) argues that understanding the medical language used by Shakespeare helps us to understand how the physical body was rhetorically constructed, what it meant to be an embodied being during the early modern period.  Miriam Jacobson’s Barbarous Antiquity (University of Pennsylvania Press, 2014) examines the effects of all the new words—as material as newly imported exotic goods of spices, paints, and dyes—on the English literature of the late sixteenth century. And, as one final example, in her preface to Ed Pavlic’s Paraph of Bone & Other Kinds of Blue (American Poetry Review, 2001), Adrienne Rich comments on the words he uses in his poems, words that were new and fresh:  “I looked up paraph, nidi, isatine, raphe, in Webster’s and found myself aware, yet again, that there are words for things we barely acknowledge, yet people have used them, the words are there” (xii).

As members of the English department, as part of the study of humanities more generally, we are committed to studying the human condition, to understand the differences of those experiences, and to empathize, to communicate, and to instruct ways of being in the world in the face of such differences.  Again, in sum, such rich work, undertaken by our faculty, our graduate and undergraduate students, demonstrates a deep commitment to and abiding faith in the importance of words, of shared signification—whether written, visual, or felt—that encourages understanding and peaceful relations.

The study of words requires material support, and I announce here two new endowments:  the R. Baxter Miller Award in African American and Multicultural Literature and the Diann Blakely Visiting Poet Fund.  The R. Baxter Miller Award is featured in this newsletter; the Diann Blakely endowment will be featured in our next newsletter.  We profusely thank the donors for their generosity in supporting the work that we do, in acknowledging with their checkbooks the value of the study of literature and language.

Please join me in thanking our donors and for recognizing the smart and exciting work engaged in by the inhabitants of Park Hall.  Please read on to see for yourselves.

Named in honor of faculty member Dr. R. Baxter Miller, this fund provides monetary awards for excellence in African American and Multicultural Literature by graduate and undergraduate students in the Department of English.

Named in honor of Diann Blakely, this fund supports a visiting poet’s short-term residency in the Department of English.